What is typical of Kashmir?

A stay of 8 days is not good enough to understand the peculiarities & the characteristics of a particular place. But while in Kashmir, we managed to catch a glimpse of many things that were either exclusive to Kashmir or there was a stamp of Kashmir on a few things found even otherwise. Though this may not be a comprehensive list, here is a description of some of them-

a) Pheran: This is a traditional Kashmiri attire worn by people of all ages & both the sexes. It is a kind of long robe that gives protection from the harsh winter season. Usually made of wool or woollen material, they are 2 layered robes. The Pherans worn by women (naturally) have beautiful embroidery work made on them  while the men have rather simple, greyish, brownish or bluish coloured Pherans sometimes with chequered patterns. This photo of Shahid Kapoor from his upcoming film 'Haider' would give you a fair idea of what a Pheran looks like... 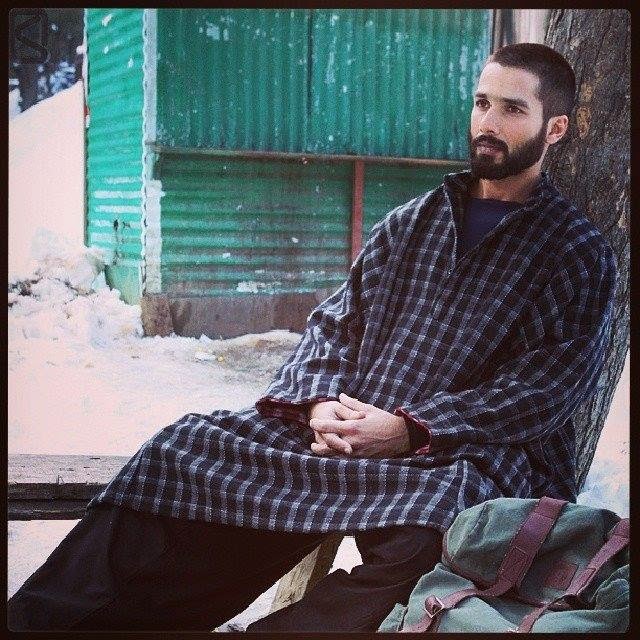 You can take your photos in traditional Kashmiri attire at almost all places of tourist interest. These photographers come to you at all places-even by shikara near your houseboat. You just have to wear the Pheran over your dress, wear the typical Kashmiri jewellery & you are ready to be clicked.

b) I know nothing about embroidery but there is a distinct Kashmiri style of embroidery on ladies tops. My wife tells me that they use wool instead of thread & most of the work is chain stitch. You can find such tops displayed at all places-from Shrinagar to Pahalgam. We had been to a shop during our stay in the houseboat. This place is at the opposite bank of Nagin lake. Not a shop actually, but a huge bungalow ! They had all sorts of items-right from dress materials to Pherans to carpets to tapestry. You (especially those of fairer sex) would be forgiven if your probing vision is unable to settle on to one particular dress material here or a purse there or a Pheran or a carpet just across. Just sample a dress material & a top.... 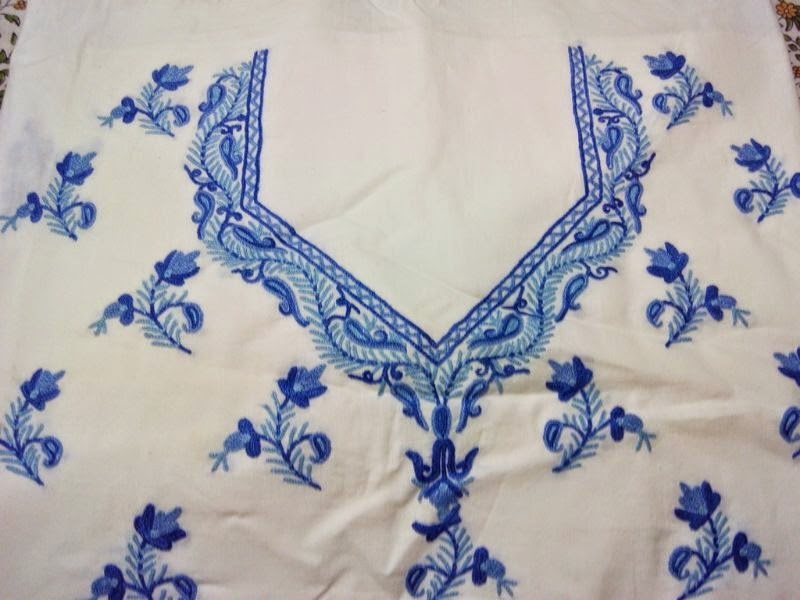 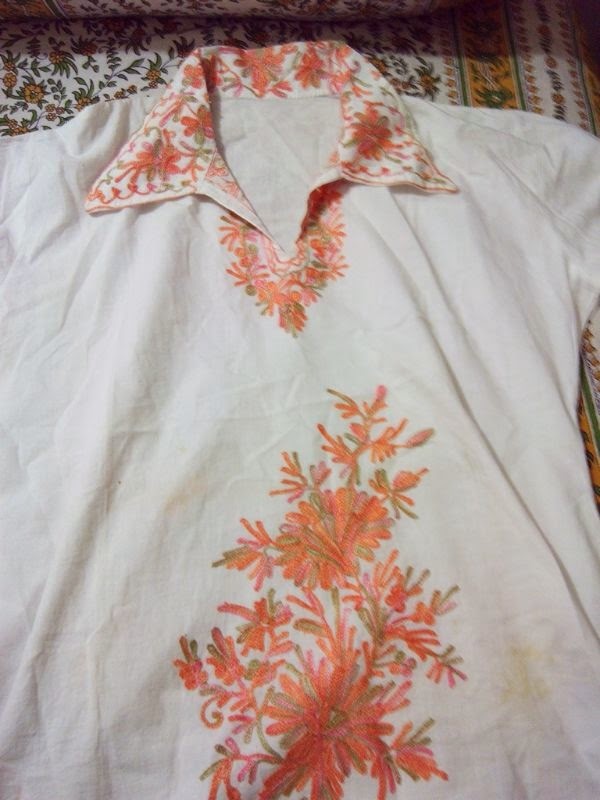 c) There were these embroidered  purses as well... 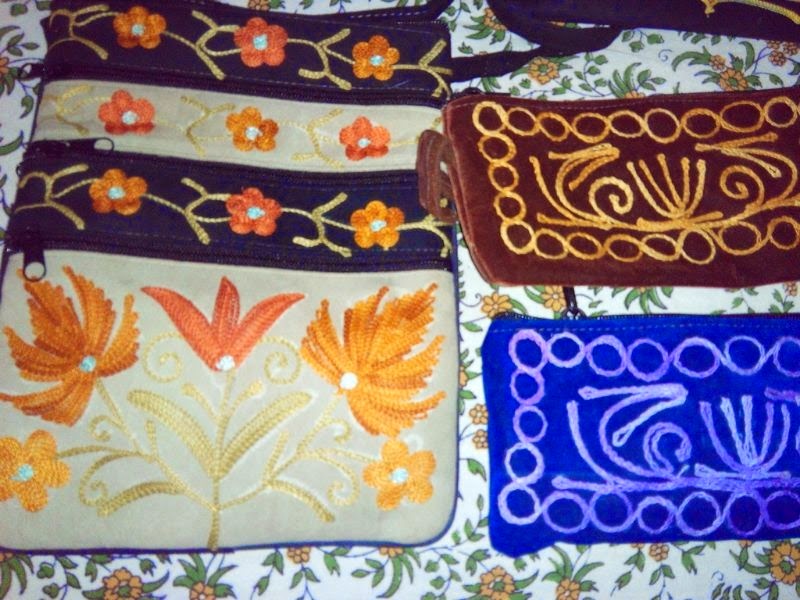 d) Tapestry : Our stay in houseboat was truly a majestic & royal experience. Actually the boat can accommodate 3 families. But fortunately for us, the third family didn't turn up. So we had the entire boat at our disposal. The soft, smooth & elegant Kashmiri carpets, the beautifully made wall hangings & also the hand made bedspreads! I really can't express the beauty in words... 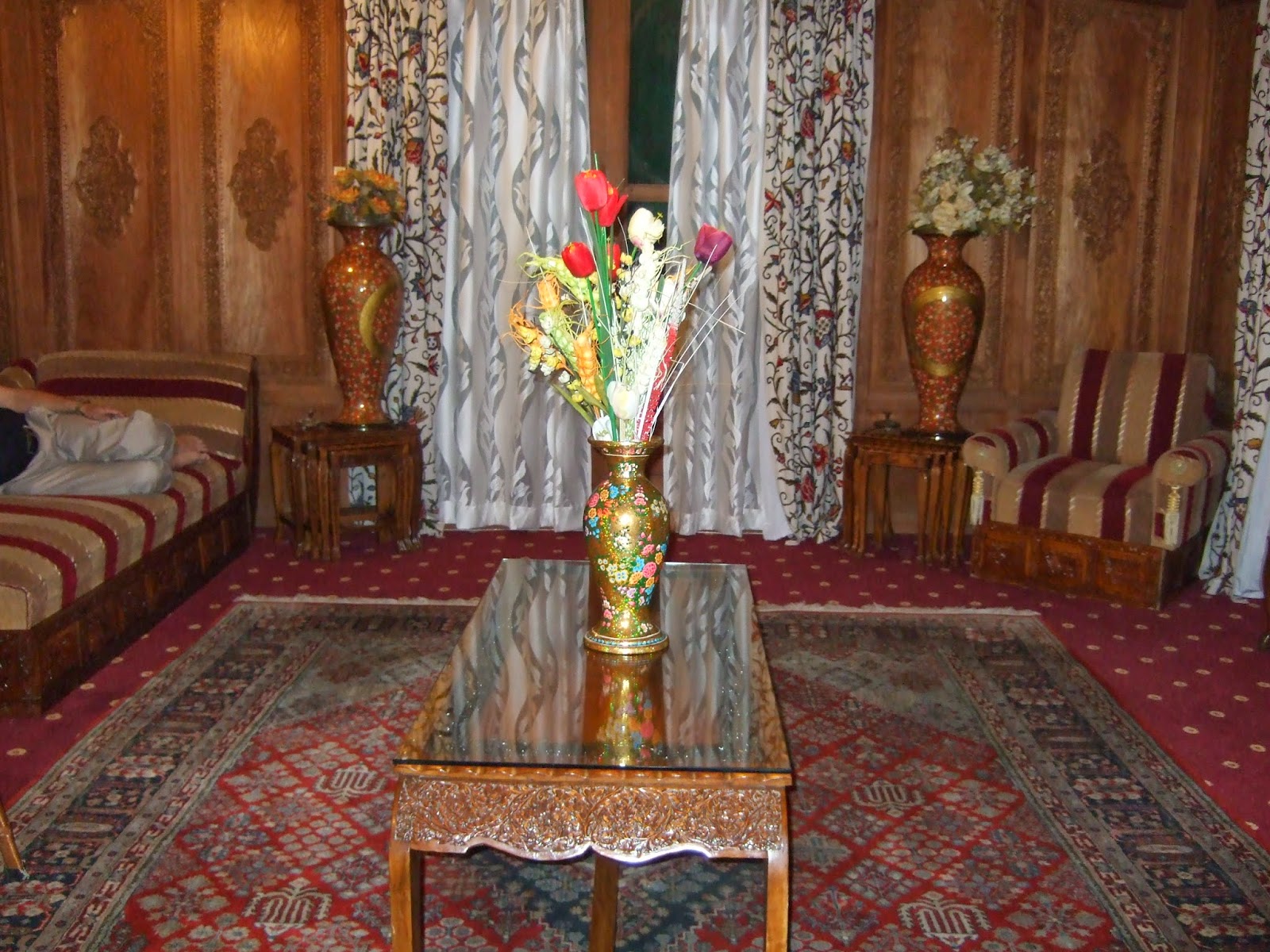 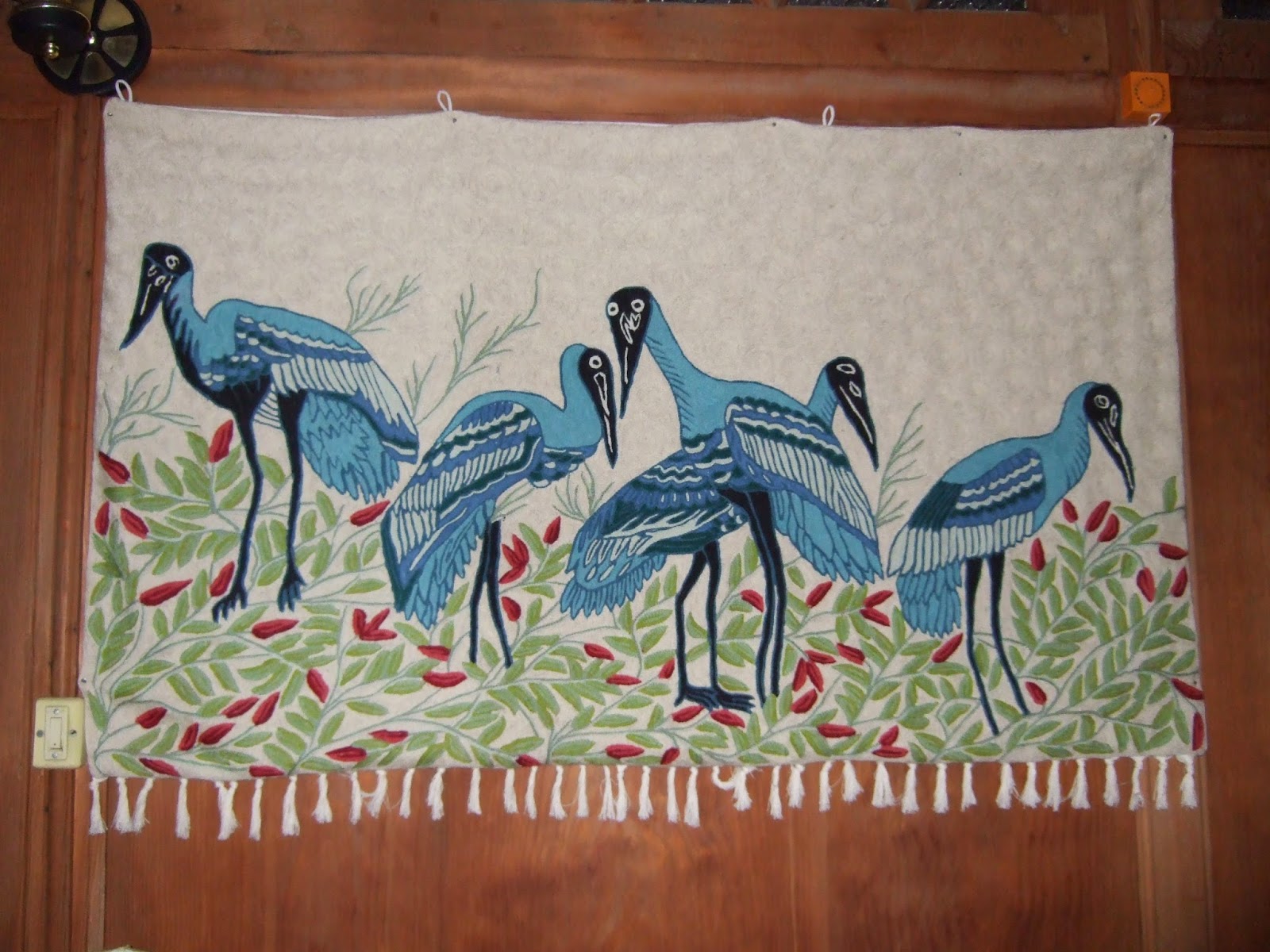 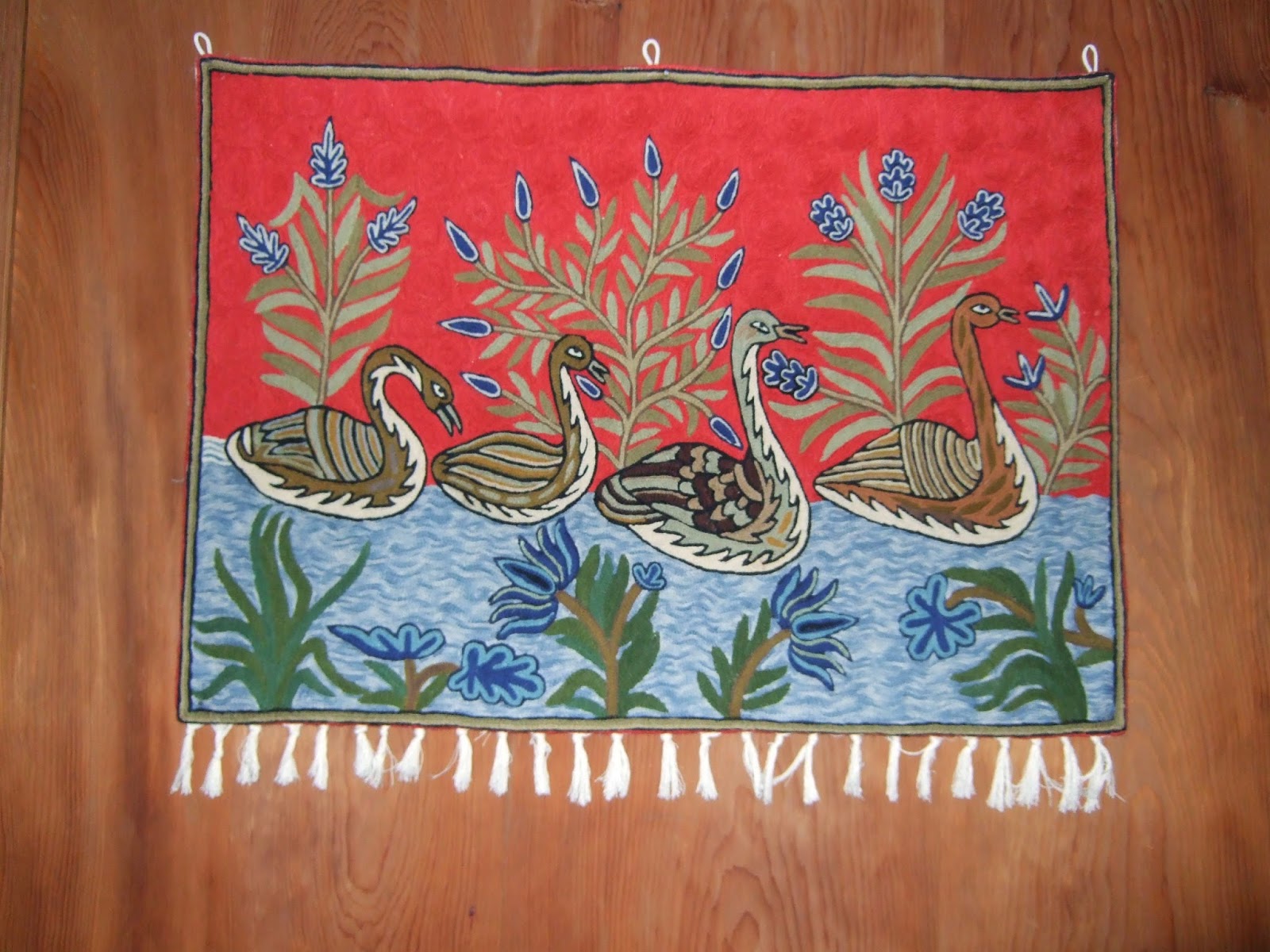 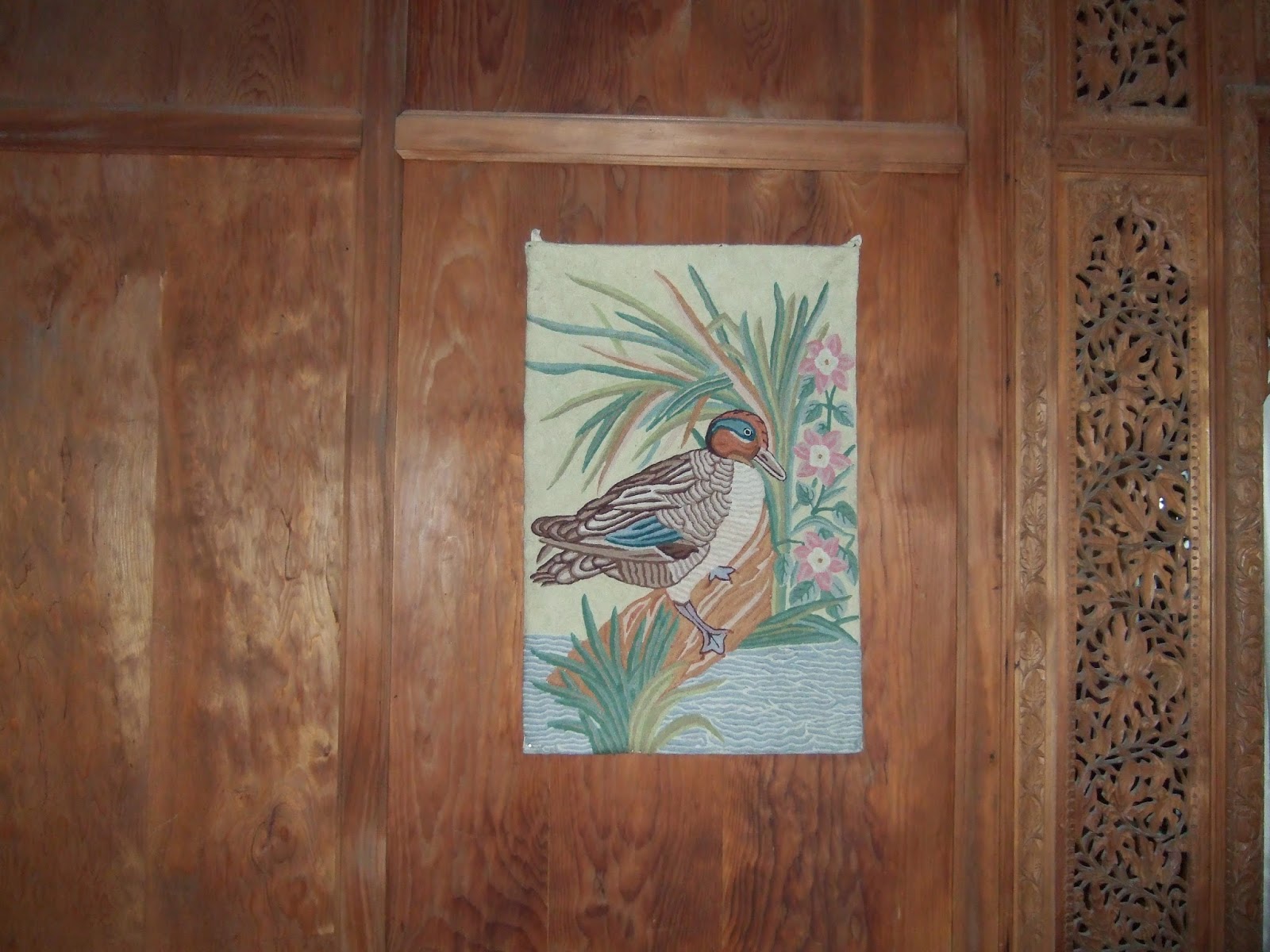 All this apparently looks very simple but the finesse & finishing is quite extraordinary as if it is machine-made. Most of it is I guess, hand-made. Obviously, more the things hand made are, more is their price. We wondered why there is such a wide range of embroidery work to be found in Kashmir. The answer lies again in the harsh climatic conditions. During cold winters, when venturing out of house is impossible, people create such wonderful works of art while staying indoors.

While we are talking about houseboat, this also quite peculiar of Kashmir. There are houseboats in Kerala as well. But I doubt if they are so tastefully decorated. We went to our houseboat from one bank of the Nagin lake to another through a Shikara-which is also unique to Kashmir. The houseboat in which we stayed was attached to ITC group. We were told that it takes about 2 1/2 to 3 years to build a houseboat. It costs somewhere in the range of 2-3 crores of Rs for it. Mostly made of Deodar & walnut-wood, the cost of maintenance is about Rs 5-6 lakhs every year & it involves mostly the polishing of the furniture. To tell you the truth, all the expenses really show as the houseboat that we were in, was very well maintained, imperial, splendid, magnificent & grand...We really rued that we stayed there only for a day. What if we could extend our holiday by one more day? That was obviously not going to be...

The beautiful furniture not just on wall partition but also on ceiling, the Chandeliers, paper mache  vases, mammoth sofas.. everything was not just eye catching but eye pleasing! 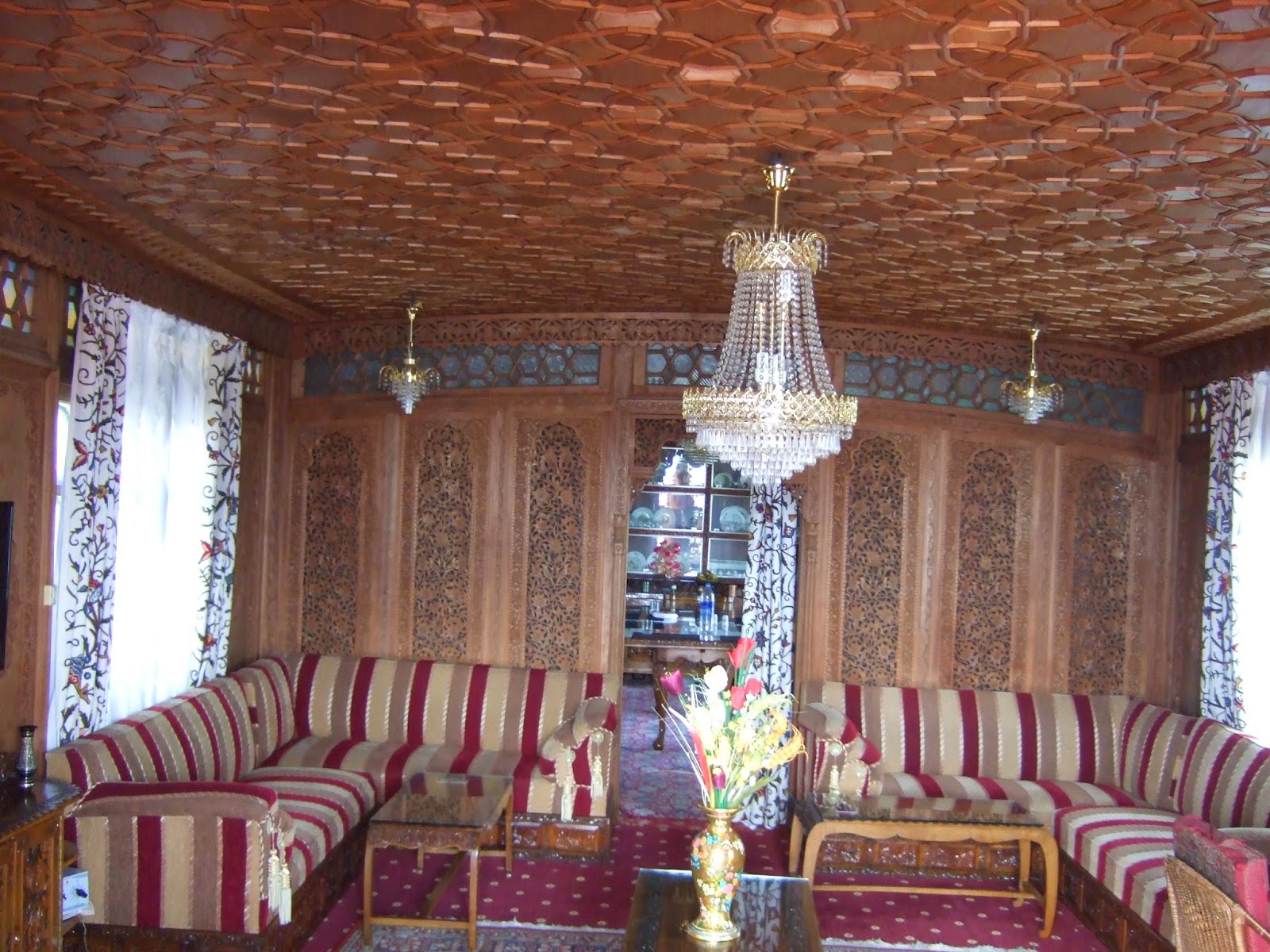 To use the word of the present generation- our stay in Houseboat was really awesome   (But I can't spell the word as they do- owsum? or awsumz?... Whatever...!!!)

On Shrinagar-Pahalgam road, suddenly you start finding heaps & heaps of wood cut in the shape of bat, neatly piled one above the other in large space. These were cricket bat factories. Yes, Kashmir these days, is also renowned for a place where cricket bats are manufactured on a large scale. These are made of wood from the Willow tree- which is found in abundance in Pahalgam area.The wood has certain peculiarities because of which it is used to prepare bats. It is able to withstand weight & pressure. You can actually stand on it but it will not break. At the same time you can mould it to give proper shape.

We visited one such factory- Metro factory- where we could actually see bats being made. The overall set up was more like a saw mill.

Cricket is a game that is played in all nooks & corners of India. Kashmir too was no exception. But in one of our small arguments with driver Shabbir, he used the point very intelligently to drive home his point of alienation of Kashmiris from the rest of India . He said in all these IPL teams or in our national team, why was it that there was no inclusion of a Kashmiri player. We were at such a point of discussion  that it needed to be countered from our side. But then, alas! My so called & reputed strong Memory! I couldn't recollect the name of Parvez Rasool. I gave the name of Maharashtra Ranji player- Samad Fallah as an example.  Shabbir got confused, though not convinced.

We were not lucky enough to have got an opportunity to taste the traditional Kashmiri cuisine i.e. 36 course Wazwan mostly a feast of non-veg dishes made for ceremonies & celebrations. Most of these dishes are mutton based. We, for no particular reason, did not eat mutton there. We only had chicken dishes. Other typical Kashmiri dishes like Kashmiri dum aloo are commonly available. We tasted Kashmiri Rajma, which I thought is on the heavier side to digest. Of all the places in Kashmir, we had Kashmiri Pulav atop phase 1 at Gulmarg. 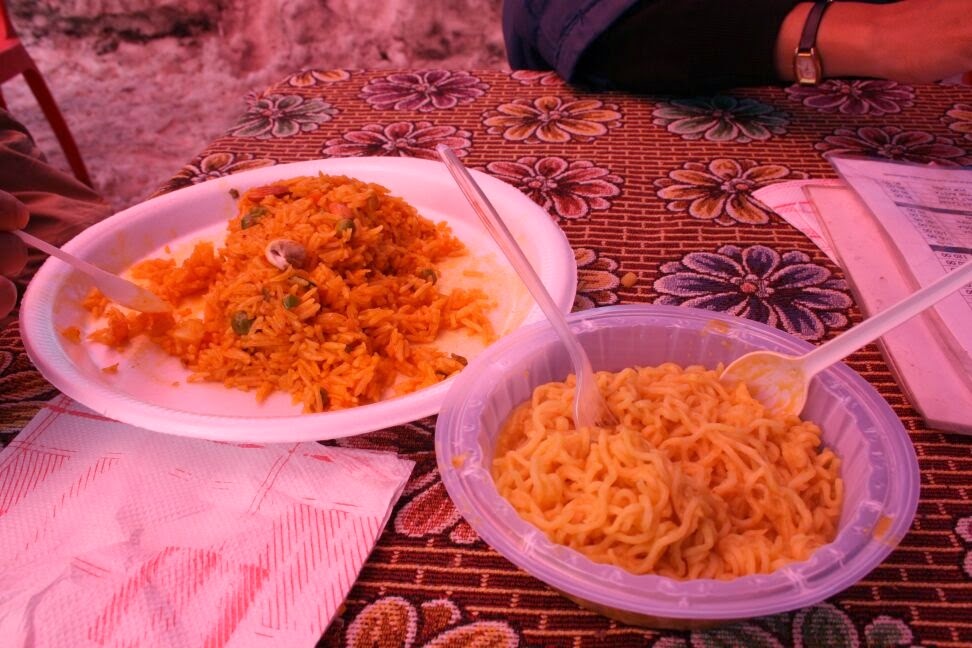 In this photo, to your left is the Kashmiri Pulav while on the right (for the uninitiated) is Maggi noodles. I don't know if this Pulav that we had could be authentic or genuine because it had some dry fruits(mainly almonds) alright, but it also had Maggi masala! Surely they would not traditionally prepare Kashmiri Pulav adding Maggi masala to it! But there on the cool, snowy mountain amid rains, anything warm was welcome. We also had onion pakoras.

Kashmiris are known tea drinkers & they have some different varieties & methods of preparing tea. One of the types of tea is called Kawa (or Kahwah or Kehwah or Qawah.. only a few variations of the same name!) This is a green tea mixed with sugar, saffron, cardamom & cinnamon, without milk & added with thinly cut almonds. Served warm, it is indeed an apt drink for the cold conditions over there. It was readily available at Gulmarg, both at the ticket queue & also at phase 1. It seems it is also served for the guests. Even if we go to shops, the owner could offer it to you. They say it is a health drink, energizing & helps to remain fresh throughout the day. You need to develop some taste for it as you don't easily digest the fact that your tea is going to be prepared using cinnamon!

While we are talking about saffron, it is indeed typical of Kashmir(though it is available in other places like Spain, USA etc). We could only see the vast saffron fields. The month of May is not the flowering season of saffron. It flowers in October.

Saffron flowers are purple colored & it is said that Kashmiri saffron is recognizable by its dark maroon-purple hue; it is among the world's darkest, which hints at strong flavour, aroma, and colouring effect. Just on a passing note, we have a Homeopathic medicine prepared from Saffron- Crocus sativus. In Shrinagar, we shopped from " the only recognized Saffron seller in Shrinagar" loads of Saffron- 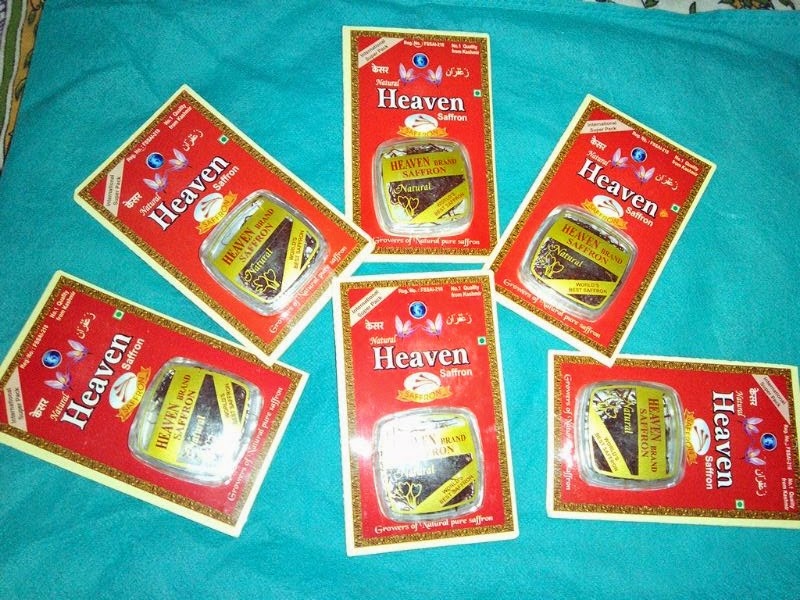 Very often on news channel, we come across this term ' Kashmiriyat ', but I had not understood its meaning. The word seems to have a cultural, religious, traditional, artistic connotation in the context of Kashmir. In the present scenario, this might have changed to add some kind of nationalistic sentiment to it. What I take the meaning of the word is that it is a way of life of the Kashmiris. In any place where tourism is the main source of income, you come across so many tourist guides & drivers & hotel waiters etc. There was a common refrain in Kashmir from these people- "Hum yahan chori nahee karte. Hum chahe aapse jyada paise mange, lekin chori kabhi nahi karenge." This we experienced not once but twice & so we can safely say it must be true. When in Shrinagar, we had been to a hotel for lunch. It so happened that we changed our table & somehow our camera remained on the sofa at the earlier table. We had fulsome meal & left without realizing we had not taken our camera along. May be after an hour or so we suddenly realized it. Then we had this session of rewinding the events & incidences of where we had been & what all we did so that we could fix the spot where we might have left the camera. One of it was the hotel. It was only a matter of chance we thought. But that had to be taken. So we went there & to our pleasant surprise, the hotel owner had kept our camera safely in the drawer of his cash counter! Another experience is of a person whom we came to know in Gulmarg. He too had come from Pune along with the famous travel co. There are various small outlets where you get gumboots, warm clothes, gloves on rent. In one such shop, this person had forgotten his laptop bag. When we were putting on the shoes, we met him. The shop owner was returning him the bag. The bag had everything-laptop, mobile, camera. So indeed they might not be indulging in thefts in Kashmir(I am tempted to say excluding the politicians!) Another thing that we noticed is very few beggars on streets! Wherever you go you would really not find them. The only exception was the Hazrat Bal Durgah. Here we saw 2-3 beggars, but they were clearly not from Kashmir. This either means that J & K is a rich state or people believe in working & earning. And both of these could be true!
(to be contd...)

Posted by Rajesh Pusalkar at 15:21

Thank you so much Amit & Aparna for your comments.